Roskilde is 35 kilometres from Copenhagen and takes around 35 mins to reach by train from the Copenhagen’s central station.  A charming small coastal town, it was the original capital of Denmark up until 1443.

Sue and Rick, our old friends, from Aberdeen University came to visit us recently. Rick had been in Denmark, years earlier, as part of his college course. One of the things he remembered from that trip was that five Viking ships had fairly recently been discovered in Roskilde and were in the process of being restored.  He was very keen to see what had been achieved in the thirty five odd years since his last visit.

The main attractions in Roskilde are the Viking Museum and Roskilde Cathedral. There is also a major music festival held there every summer. For three days, the youth of Copenhagen decamp en masse to a large muddy field and have a very hygge time.

Growing up In Scotland, we learned that Vikings were fierce, scary and unforgiving invaders from Scandinavia. Burning and pillaging their way up and down the coastline of Britain, they struck terror into the villagers who caught sight of their characteristic long boats approaching from the sea. It is hard to reconcile the image of Vikings from over a thousand years ago, with the polite, well mannered Danes of today.

At one stage, part of England was even conquered by Denmark. I was super excited to discover recently that the English King Canute (or Knut) was actually Danish. I always remembered a particular story from school about King Canute. (It was the same simplified version of history books that told me all about Anna Pavlova). Somehow, Canute was cornered into saying he was so powerful he could stop the tide coming in. Naturally he was challenged and brought to the seaside to prove himself. He got a bit wet! There is currently an exhibition about King Canute at the Viking Museum, The Greatest Viking King. Probably best not to mention the whole stopping the waves thing.

The Viking museum in Roskilde is predominantly about Viking ships, no mention of the pillaging! So if you want to find out more about Vikings per se, and their bloody history you have to look elsewhere.The National Museum in Copenhagen has a huge section on Vikings.

In 1962, five Viking ships were discovered at Skuldeley, in the Roskilde Fjord. They had lain at the bottom of the ford since 1070, when they were deliberately sunk to block access to Roskilde from the sea. The Museum is mainly built around the excavated remains of the five ships, which have now been pieced together from the pieces found on the seabed.

They are on display in one large room, against a backdrop of the fabulous Danish coastline.

Outside, in the shipyard,  you can explore many other different boats, Some are originals, gathered from all over Scandinavia, and others are reconstructions, built at the museum itself. 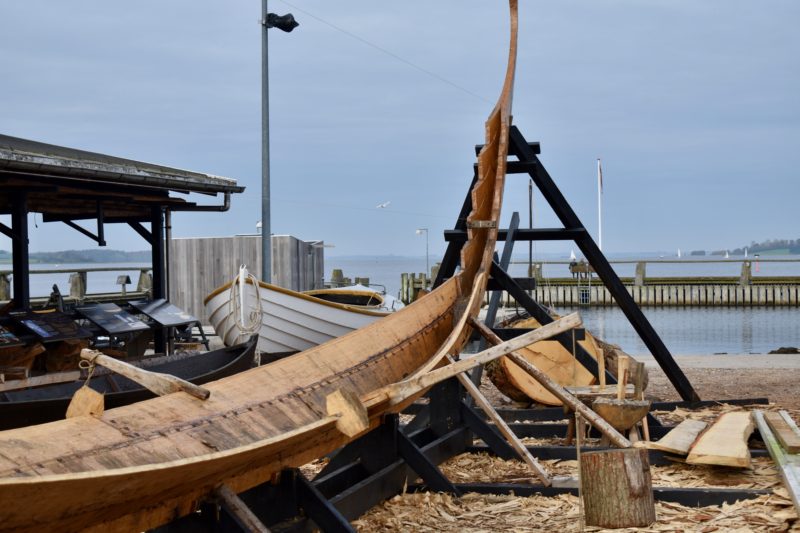 The new ships are constructed using traditional Viking methods. It is possible to get up close and personal and be involved in the process, as the shipyard offers hands on workshops.

Most of the excitement take place during the summer and school breaks. They offer courses on things like how to build and sail a viking. There are also children’s  activities. When we were there in October there was not a lot going on. However we could still walk around outside and read all the information about types of wood and the various tools that would have been used. 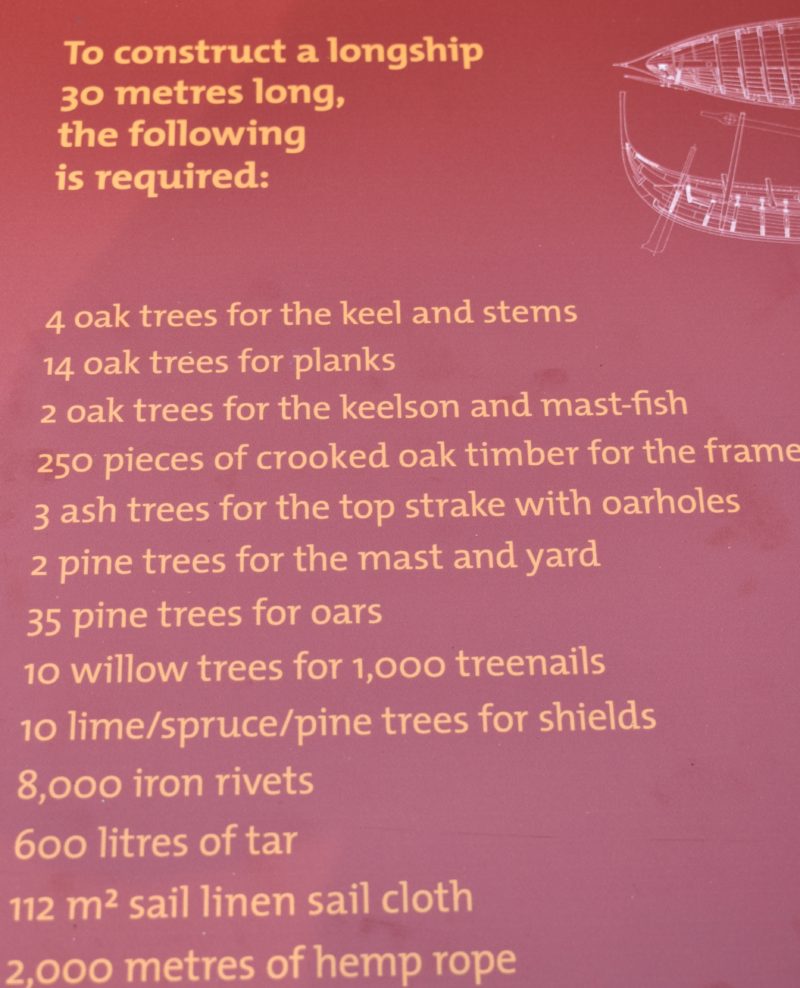 During the summer a few of the ships are taken out on long sea voyages. A chance for to experience first hand the  conditions during the age of the Vikings. As the boats lie low in the water it is not for the fainthearted!

When the shipyard was being built, they discovered a further nine Viking boats, which are now slowly being excavated.

The museum is a short walk from the town centre. On the way back we stopped at lovely little restaurant called Pipershus. It offers traditional Danish food and on a good day views of the Fjord.

Since I have come to live in Copenhagen I have trained to be a tour guide. It suits my personality very well. I love learning, especially history, and I love holding court and making people listen to everything I have to say! So it is kind of perfect.

I have found out about how Denmark has existed as a country since Gorm the Gammel and his son Harald Bluetooth (yes, like in the bluetooth speakers!) converted to Christianity in 958AD.  The date is known because Denmark, Gorm and Harald are all mentioned in the Jelling Stones, two large rune covered stones found in the town of Jelling. So Jelling was really the first capital of Denmark.

However, Harald Bluetooth moved the capital  to Roskilde. There has been a church or chapel on the site of what is now Roskilde Cathedral since that time. Harald  is supposedly buried somewhere in the grounds although no remains have been found.

The present Cathedral dates back to 1170 and is the first example of a French inspired Gothic brick Cathedral.

The kings and queens of Denmark have always been buried there. The oldest known remains, those of  Margrethe I (d. 1412), are immediately behind the high altar. Over the years additional chapels have been added onto the original building to hold the cask, coffins and sarcopphicases of Danish royalty.

The styles vary enormously.  The most ornate chapel is definaately that of our good friend Christian IVth.

Some are much simpler in keeping with the Lutheran style.

As I have learnt so much about Denmark’s history, I found the Cathedral incredibly interesting. I saw the burial sites of all the kings I had read about. Even without a detailed knowledge, it is impossible not to feel the incredible sense of history when you walk around.

The church was originally consecrated as a Catholic Church, but since the reformation, around 400 hundred years ago, is now Lutheran. One of the chapels, St Bridget’s chapel, holds the oldest gravestone dating back to c1250 together with Catholic furniture which is no longer required.

It has also been chosen by the present Queen as the site of her final resting place. It now contains a double sarcophagus, created by artist Bjørn Nørgaardof, for herself and her Prince Consort.

Sadly her consort,  Prince Henrik, who died on Valentine’s day announced just before his death, that he did not wish to be buried next to the Queen. It seems he resented being only a Prince and not a King. Following his funeral he was cremated and his ashes scattered at sea. Was a sad day in Denmark.

Back to ‘normal’ so first picture of my husban

One of the greatest joys of my little hobby cateri

Happy birthday to my gorgeous husband. I made the

No photos from Christmas Day meal but here’s the

This may be the latest I have ever made my Christm

Loving my Florentines! Maybe more than my mince p

Having fun in my favourite shop in Darien!

Up on the blog now, sausage rolls, food of the god

The Christmas Afternoon Tea at the @dariendca thi