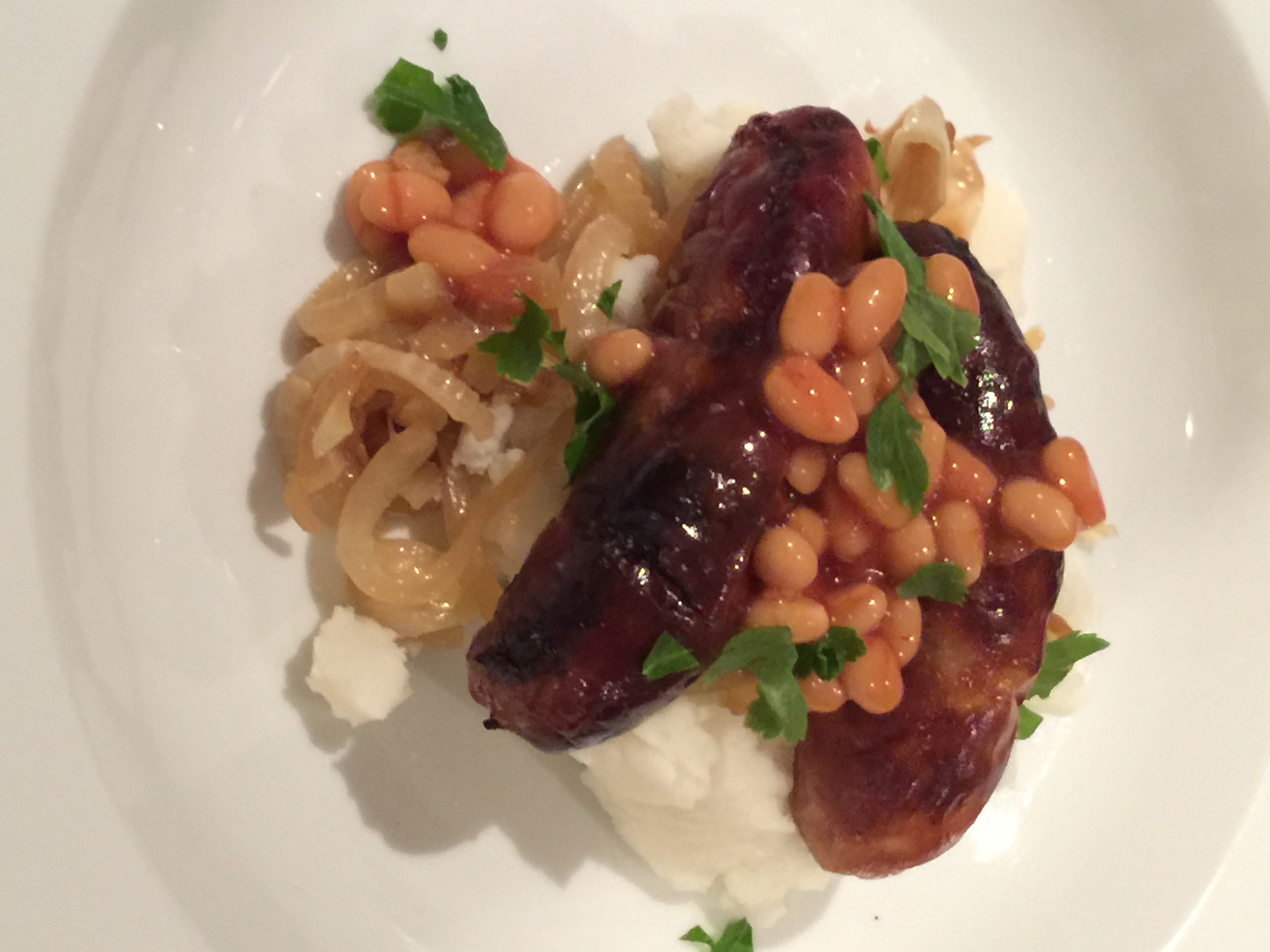 ( Irish) Bangers and Mash or Colcannon

This is the lunch I served for the January 2015 Darien Community Association Woman’s group lunch.  I think I cleaned out Whole Foods as I left with 192 sausages.  It seem a perfect supper to serve up while we waited for the blizzard to hit.  I mixed it up slightly and added some roasted yams and sweet potato for supper and left the mash plain.  For the lunch at the DCA I tried out Colcannon, a fabulous mix of mashed potatoes, cabbage and scallions.

Now I feel I should own up to my mashed potato obsession.  If I eat out I generally look to see what comes with mashed potatoes, and then order that.  It is probably linked to my celtic background, as Scots and Irish share a common heritage.  The Irish do take their potatoes very seriously and it is not uncommon for them to  serve up to three different types for one meal..  Bliss.

12 Irish bangers (from Whole Foods, or Trader Joe’s in the weeks leading up to St Patricks Day).  Now obviously you can use any sausage for this dish, but Irish bangers are a non-fennel pork sausage. I always buy, and cook, more sausages as they are wonderful cold, great for breakfast or can be added to soups or pasta sauce.

As you know since coming to Denmark sausages have been a bit of an issue, see my post on sausages the perils of social media. Luckily, as we are back in the UK quite a bit, we buy them on the way to the airport. Although I have just found out about a website that sells all sorts of British goods so am excited to try their (frozen) sausages. www.Abigail.dk

little olive oil and a knob of butter

half a savoy cabbage

I cook my sausages in the oven.  Place them on a baking sheet, pricking them twice on each side.  Cook the sausages for around 30-35 mins, turning them halfway through, until they are a lovely dark brown.

Heat  a tablespoon of butter and a splash of olive oil in a large saute pan.  Add onions and cook a medium heat stirring every now and then.  After about 30 mins throw in a little thyme. The idea is to cook the onions slowly until they start to turn a dark golden brown, which takes anything up to an hour.

Peel and boil the potatoes in salted water as for regular mashed potatoes.

Add sliced scallions to milk in a saucepan and bring milk to the boil.

Shred and cook cabbage in salted water until tender.

When potatoes are ready drain them and then add butter and hot milk and mash well. Mix in drained cabbage and check for seasoning.

place a large dollop of mash in the middle of a plate.  Top with sausages, caramelized onions and baked beans. HP sauce would be great with this!

3 thoughts on “( Irish) Bangers and Mash or Colcannon”

And the first Christmas cake of the season! #chris

I may not have decked the halls with boughs of hol

Happy Thanksgiving to all! The final pie in my tha

With smaller numbers for Thanksgiving, I am trying

Pictures from yesterday’s lunch. Think I may hav

Okay @brpboxshop, you have outdone yourself. Love

Trying out some new additions to my mini grazing b

Is this a pavlova or a meringue ( Scottish joke).

Fabulous Buttermilk Roast Chicken with The Most Pe