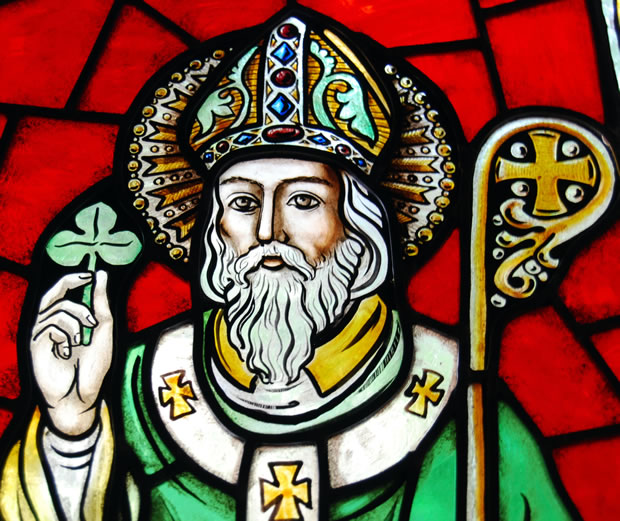 March 17th is normally a day for celebrating, finding an Irish pub, eating Irish food and drinking Guinness. But we are not living in normal times. We are all being asked to do our part, limit social contact and avoid crowds. In many parts of the world, authorities have asked restaurants and bars to close, allowing them to offer a take away service instead. New York and Connecticut has just shut everything down. In part, as an attempt to stop people gathering on Tuesday.

However, there is no reason we cannot still celebrate St Patrick’s Day at home. ( If you are lucky enough to have a local restaurant offering take out Irish food, my first suggestion would be to support them and order out! )

St Patrick is the patron saint of Ireland. He brought Christianity to Ireland and, for good measure, also got rid of all the snakes. Probably of English, Welsh or Scottish descent, he first came to Ireland as a slave.  He spent sixteen years as a shepherd, much of it in isolation in the hills of County Antrim ( perhaps a good role model for us today) and he turned to prayer to help him with the loneliness. After escaping to England he became a priest. Legend has it that he had a vision telling him to return to Ireland. Over three decades, he established schools, churches, and monasteries from his ministry in the north. By the time of his death on 17th March AD461, he had become the Bishop of Ireland.

On the anniversary of St Patricks death, the Irish, those living in Ireland and the diaspora around the world, normally invite everyone into their community to join in the celebrations. Everyone can be Irish for a day. And (Oh Danny) boy, do they know how to celebrate. The rules of Lent are relaxed and the 17th is definitely a Feast Day, or more correctly a drinking day.

Growing up in the North East of Scotland, it was a day that passed us by. Our own patron Saint, St Andrew, has no worldwide party or celebrations attached to his day on the 30th November. I have attended a St Andrew’s Day Dinner in NYC, the sort of event held in larger towns or cities, but it was a much more civilized affair. The Scots celebrate Robert Burns, their national poet, over their national saint.

Despite both races being of Celtic origin, the Scots tend to be viewed as more serious and sober, at times downright ‘dour’. There are still many parts of the country, especially in the Highlands and Islands, that are dry, and where dancing is considered to be the ‘work of the devil’. That’s not to say that we don’t know how to have fun. There is no doubt, however, which of the two Celtic nations is seen as the one that knows how to party!

Now there is a little bit of truth in saying that America loves an excuse to celebrate, or at the very least to buy all the trimmings for a party. When I first arrived in Darien, over 18 years ago, I was amazed to find, that leading up to St Patrick’s Day, everything was green. Even the flowers were dyed a slightly scary and unnatural shade. Which is a slight irony, as blue, not green, is the color associated with St Patrick.

You can buy Irish bangers in Trader Joes and Costco, together with soda bread. Can I confess, that I have always stockpiled Irish bangers, as they are not readily available all year round. For more on my sausage obsession read http://www.carolynsabsolutelyfabulousevents.com/british/sausages-cautionary-tale/ The shops are full of shamrocks and Leprechauns and obviously Guinness is everywhere. The soda bread in America is a little different, it contains raisins and is sweet. For a more traditional Soda Bread check out my version which is fabulous with smoked salmon. I included recipe in the post for some quick pickled red onions, a great way to preserve vegetables. Just saying! http://www.carolynsabsolutelyfabulousevents.com/recipes/nordic-platter/

Americans do love a parade, and there are normally parades in most major cities. New York city held their first St Patrick’s Day Parade in 1762. Chicago even goes one better and dyes its river green. As a result of the concerns of spreading the coronavirus, all parades have been cancelled this year.

There are several Irish pubs in Copenhagen. The Globe, in the center of town, usually holds an annual St Patrick’s day pub crawl.  The rules are that you have to run to six specified pubs and drink a pint in each of them. Guinness, obviously! Oh and its a three-legged race! Apparently the record for fastest time is 19 minutes. However, Denmark is also on lockdown and I doubt the pub crawl is happening this year.

We are living in strange times, but still have so many reasons to be thankful. Despite a little panic buying, the food supply chain is excellent. If we have to spent more time at home, we have all our home comforts around us. This year, I encourage you to hygge inside with some Irish food.

But what should we eat?

I know everyone in America eats corned beef on St Patricks day, but I still  do not have the courage to try it. For me, corned beef is something that comes in a tin (can) with one of those fiddly keys that rarely works.  My first choice for a homage to Irish cooking would be bangers and mash. However, I recently made a beef stew with Guinness. It was fabulous.   Obviously, I would suggest serving it with mashed potatoes, did I mention my mashed potato obsession, or the traditional Irish dish combining potatoes with cabbage, colcannon  and any green vegetable.

Desserts are a bit tricky. Unlike us Scots, there does not seem to be much of a dessert tradition in Ireland. Please let me know if you have information to the contrary! For a St Patrick’s day lunch I catered a few years ago, I came across an excellent Chocolate Chip cheesecake with Baileys. Don’t panic! You have enough Baileys left over to toast St Patrick!

Beef in Guiness with Orange

A warming beef stew with a rich gravy made with Guinness and orange zest. Perfect for St Patrick's Day.

Wherever you are in the world, may I wish you sláinte, the Irish word for cheers, or more accurately health. I am also going to leave you with a traditional Irish blessing

Congratulations to William and Nan on their Weddin

Fabulous dinner from my new joint venture EAT with

Inspired by @butterandsugarforever, May I introduc

Love the different flavours and textures of Mexica

My second ever Tres Leches cake. A little gluten f

My first ever Tres Leche Cake. Thanks to @thefulle

Photos from last week’s dinner. New menu is out

Shoutout to @_foodstories_ for the pear cake inspi