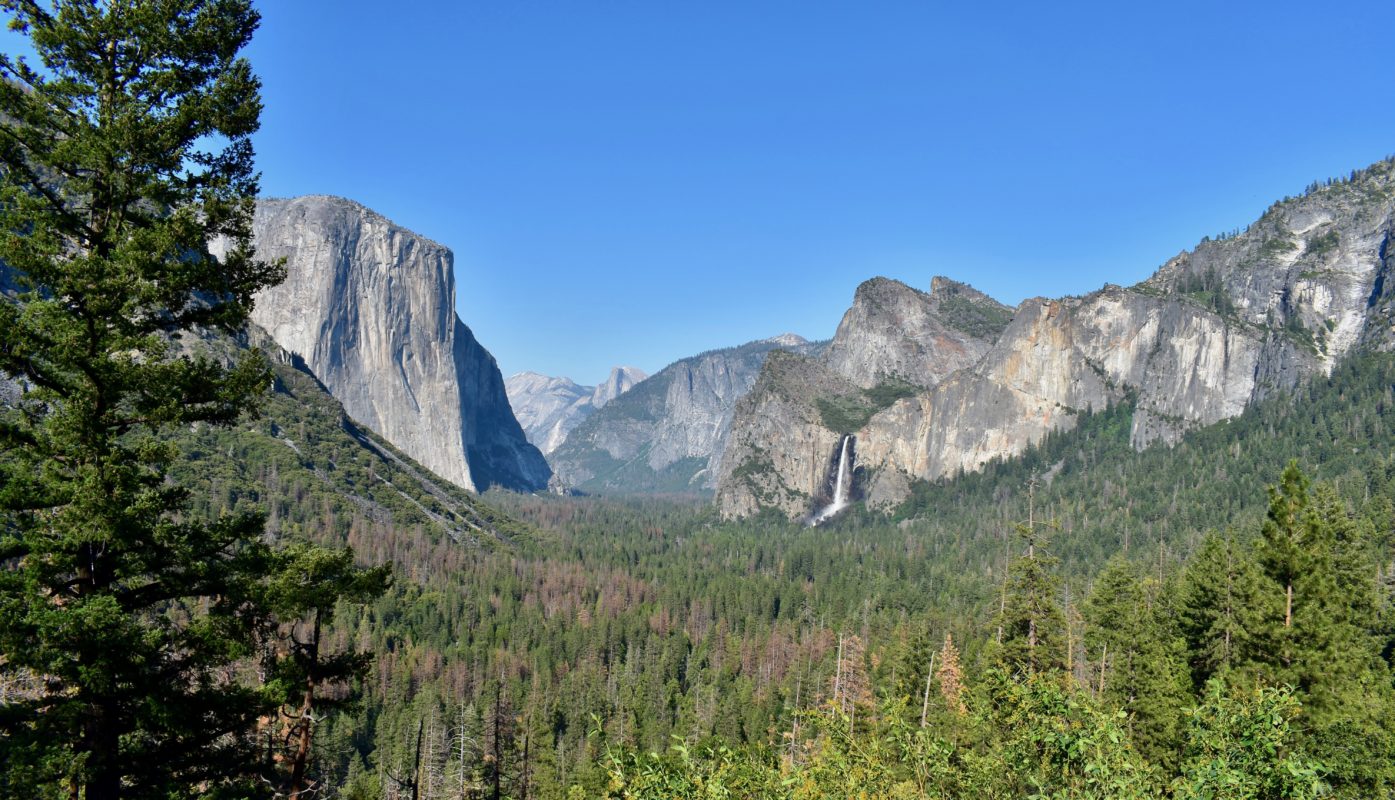 We travelled to Yosemite last year. It has been so sad to hear of the wild fires that closed the park to visitors. So glad to hear that the roads are open and the Valley is clear of smoke.

Visiting Yosemite has been on my to do list for years.  As the whole family was getting together for my son’s graduation this summer, I thought it might be our last chance to go there for a family vacation.

I had been tracking the temperature and was delighted to see a perfect mid-seventies forecast for our five-day trip.  However, the alarm bells starting ringing as we were driving through the central plains of California. The outdoor temperature kept rising until it was registering 111F.  I am not sure what part of Yosemite was a temperate mid 70s but at our destination it was in the high 90s.

Now , I knew the scenery was going to be impressive but I was still quite unprepared for the breathtaking nature of the of the park. The final part of our drive to our hotel was from the south to the west gate of  Yosemite. As we came out of a long, long  tunnel we suddenly found ourselves in the middle of one of the most dramatic landscapes I have ever seen.  Despite searing temperatures, we joined the other sightseers in just standing and gazing at the granite monoliths El Capitan and Half Dome and the Bridalveil Falls.   We could have turned the car there and then and the journey would have been worth it. 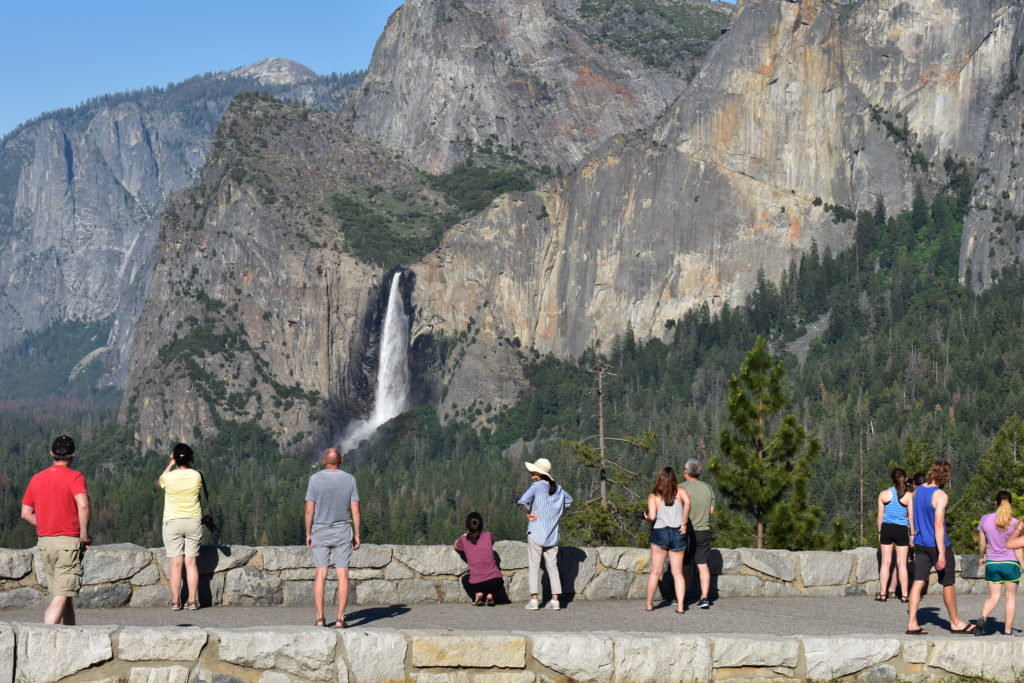 To be able to do any serious hiking I convinced my family that the only way was by rising early and being on the trails by 8.00am at the latest,. This turned out to be stroke of luck on my part, as I had not realized just quite how many people visit Yosemite in the summer.

Although the park covers an area of 1,169 square miles almost 95% is designated wilderness.  Last year 5.2 million guests visited Yosemite with almost half of them arriving in the summer months of June, July and August.  Like us, most of them are heading to the 5.9 sq. miles known as Yosemite Valley. There you find shops, restaurants, a visitor center and a free shuttle service. An excellent infrastructure has been put in place within the valley. There are over 20 miles of paved paths and visitors have easy access to many of the famous waterfalls and trails. The buses run all day long from the car parks and camping site but you have to get there early as the car parks fill up by 9 a.m.

Mirror Lake, named for its glassy surface which reflects Mt Watkins, is a fabulous way to start hiking in Yosemite. We began the day by walking the one mile from the carpark on paved roads. The trail around the lake is a 5 mile loop. During the hike we had cold air cooling us from the lake and shade from the trees. For much of the send half we were wading through icy cold water, which was lovely! We also saw few other hikers until near the end of our walk. Suddenly large groups of people started meeting us coming from the other direction.  It turned out  that the bus stop was close to the end of the trail so we chose to hop on the next shuttle and head back for a late lunch.

Driving to see the sunset at Glacier Point was definitely one of the highlights of our trip. The access road up to the peak is near the south gate. From Yosemite Valley it should take around an hour to drive all the way up. There are some pretty hairy bends, especially towards the top of the peak, which stands at 7,214 ft. Even in July there are still patches of snow, but keep going because it is worth it. Once there you will find a large carpark and a fun atmosphere. Every night crowds gather to picnic, take photos and listen to rangers telling stories about the park and its history.

We had an added bonus of seeing a bear on the way there. Thankfully it was far, far away and seemed to very happy just chilling in a field of long grass.

Record levels of snow and rain this winter saw the end of six years of drought in California. Even in July there was still lots of snow high in the hills. As a result Yosemite’s waterfalls were spectacular, even well past their normal peak time of May. You can reach the base of Lower Yosemite Falls after a short walk from one of the shuttle stops. There is wheelchair access all the way up to the waterfall.  Once you get there the spray from the falls is a lovely way to cool down.

Yosemite Falls is the highest waterfall in America dropping 2,425 feet to the valley floor. There is a trail leading all the way to the top, Upper Yosemite Falls,  but it is a strenuous 6-8 mile hike. We did start hiking up hoping to reach Columbia Point, a look out only one mile from the start. Sadly, we ran out of both time and water and had to turn back. We met a few hikers who had reached the top but they had started at 4am!

The Mist trails are one of the most popular trails in Yosemite. They lead up past Vernal Falls and continue to Nevada Falls. At the top they connect to the John Muir trails, which offer an easier way to descend back to the valley floor. We split up on this hike as the stairs leading up to Vernal Falls were very wet, narrow and looked perilously close to the rushing water below. Some went up the Mist trails, others went up the John Muir trails ad then we met at the top. Now we are a super geeky family. You must agree however that some of the photos below could come straight out of Lord of the Rings or Game of Thrones. We felt as though we were on a quest, and luckily there were no dragons or ringwraithes on our tail. 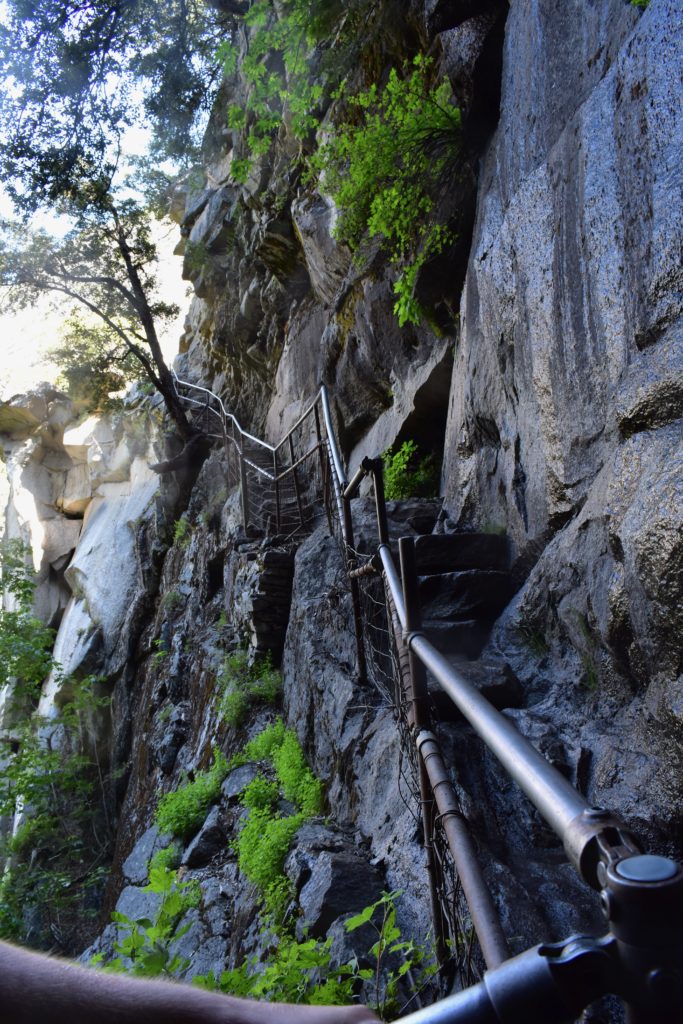 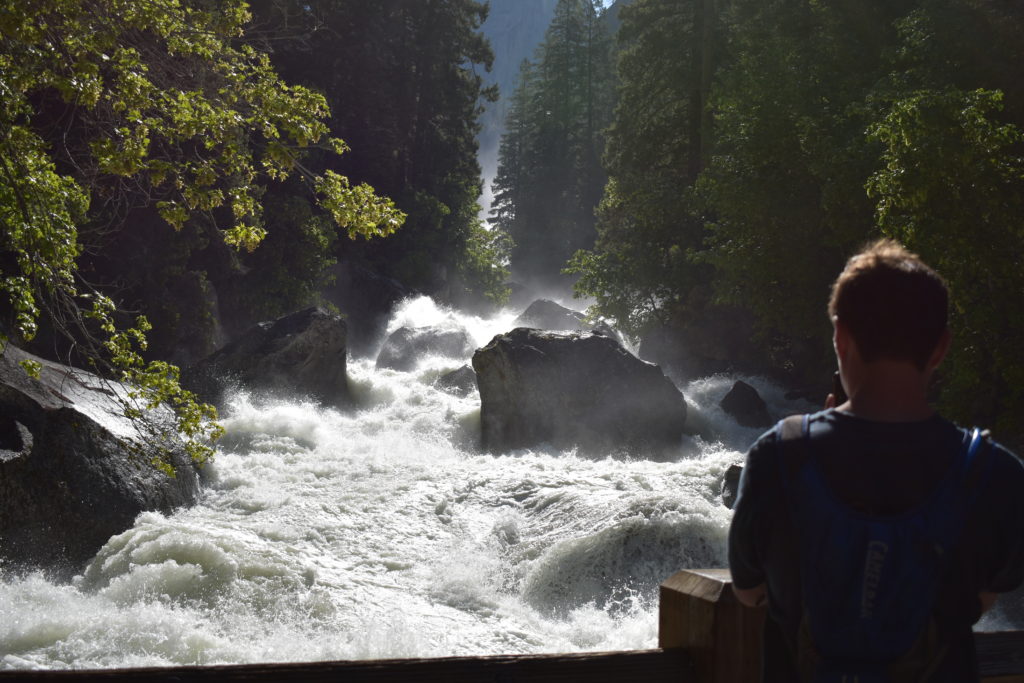 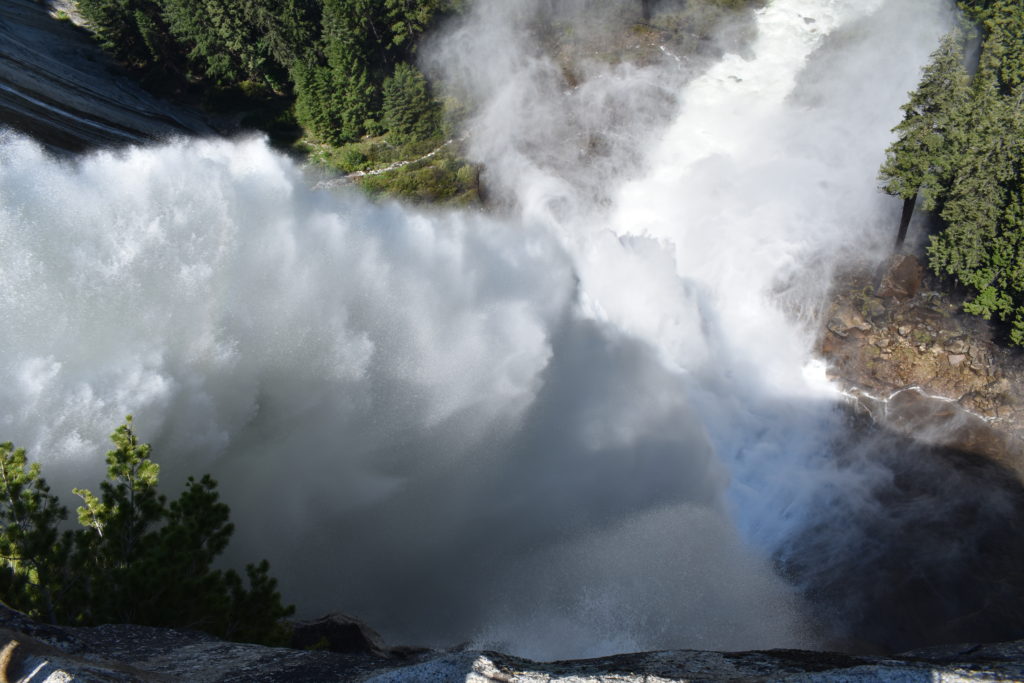 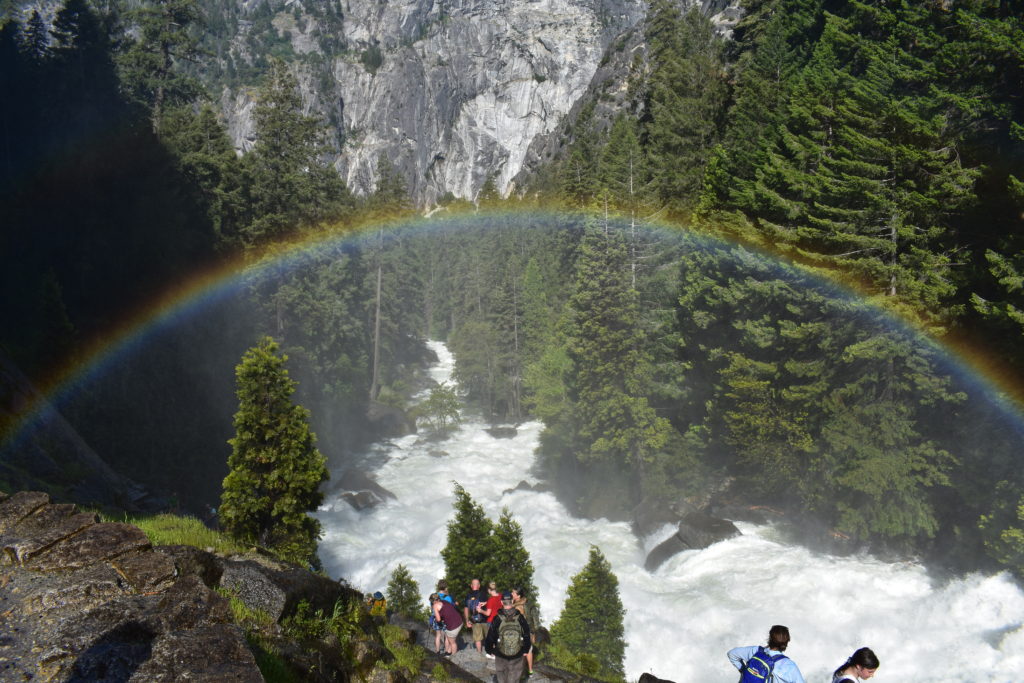 Second confession, we are also major Disney fans.  We have been to Disney’s Wilderness Lodge, based on the great lodges of the National Parks, and I was curious to see the real thing.  The Majestic Yosemite Lodge was very impressive, almost as good as the Disney version.  Actually, like everything else at Yosemite, it was spectacular.  We had lunch in the dining room, the food was superb and the glass of wine I allowed myself felt well deserved.

Alan’s dad wanted to see some sequoias  but sadly Mariposa Grove, Yosemite’s famous ancient forest,  was closed for renovations.  On our way home we drove the three hours to Sequoia National Park.  Why did I not know that sequoias grow on the top of mountains? The drive up to the largest trees in the world was absolutely terrifying. We kept thinking we were at the top but then could see tiny specks much higher up, which were cars still navigating the hairpin bends on ever narrower roads. We were in real ‘Lord of the Rings’ territory. These trees are enormous!

Any trip to California involves eating lots of avocados.  It is kind of compulsory, so I am including a link to my “recipe” for Avocado Toasts