Salad Niçoise is a classic French dish. I switch it up slightly and use fresh roasted salmon instead of the traditional tinned tuna. With a lemon dressing, the combination of salmon, baby new potatoes, French green beans and locally grown tomatoes is perfect for a summer lunch or light supper.

Whilst doing a bit of research on the origins of Salad Niçoise (thanks Wikipedia) I discovered I am joining a long list of chefs and cooks who disagree on what makes a classic Niçoise. There is no dispute about where the salad came from, Nice, but after that it is all downhill.

I am offending purists by including cooked potatoes and green beans. I am switching out salmon for the more traditional tuna (feel free to switch it back). My dressing is a light lemon vinaigrette, no mayonnaise is involved. I insist on both black olives and anchovies.,

As with all recipes, what you do in the privacy of your own kitchen is entirely up to you!

Salad Niçoise was one of my go to salads when I was catering back in Darien. All the bits (technical catering term), can be cooked and dressed in advance The salad itself can be assembled just as guests arrive, but it will happily sit around until you have poured that first glass of rosé. It also looks spectacular. Are you beginning to see the attraction?  It gets better.

I use salmon left over from my

as a  way of making the salmon go a little further.

Or you could use some

Apart from French green beans almost all the ingredients,

potatoes, tomatoes and lemons are the sort of thing you generally have in the house. However, at this time of the year, in Great Britain and Denmark, we are blessed with fabulous ‘new potatoes’.

Now I think I may have mentioned my potato obsession?  For some reason ‘New Potatoes’, the ones where the skin is paper thin and can just be rubbed off, is something I could not find when I was living in America. The closest I ever got was fingerlings.

During the summer months, when I was growing up in Scotland, we existed almost exclusively on new potatoes and butter and strawberries and clotted cream.  Jersey Royals would appear early in the season, and then later, local potatoes would be available either in the shops or directly from the farm. It was heaven.

Most people also grew a few drills of potatoes in their back garden.  My dad would often go out and dig up just enough potatoes for the next meal. Now that is a new potato!

One of the many attractions of living in Denmark, is, that with a similar climate and heritage, I can once again enjoy “New Potatoes”. And I do!

And I am assuming everyone always has tinned black olives and anchovies in their well stocked larder?

: To feed six for lunch or a hungry four for dinner. There really is no right or wrong set of proportions. I usually cook everything, then layer the salad adding more tomatoes or lettuce so it looks balanced. Serve with crusty French bread to mop up the delicious lemony dressing.
: easy
Print This

Salad Niçoise is a classic French dish. In this version I use fresh roasted salmon instead of the traditional tinned tuna. With a lemon dressing the combination of potatoes, green beans and tomatoes is perfect for a summer lunch or light supper.

Serve with crusty bread to mop up the lovely lemony dressing, and a glass of Rosé. Close you eyes and pretend you are in the South of France. 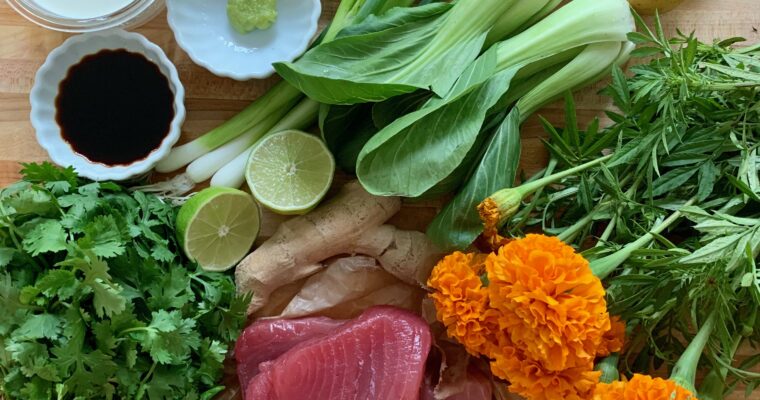 TUNA WITH LIME CILANTRO SAUCE, WASABI MASHED POTATOES AND BOK CHOY I first tasted this lime and cilantro sauce at my friend Lynn’s house.  We were co-chairs of the wine tasting committee for the Darien YWCA, a tough job but somebody had to do it. […] 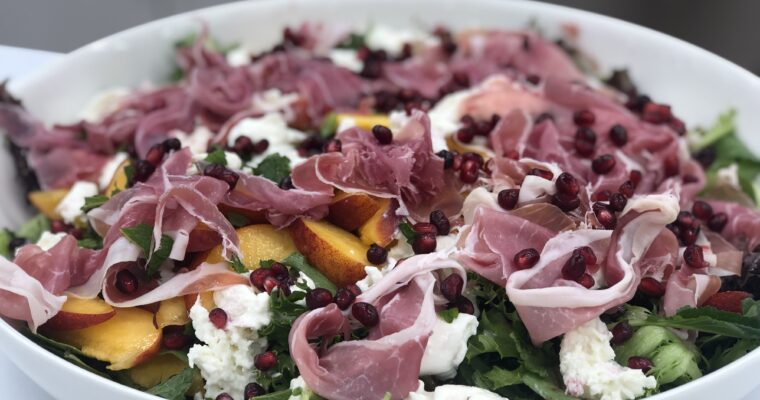 In this post, I am going to give you ideas about how to use seasonal summer produce to make four fabulous side salads. In July, peaches and nectarine are at their best, watermelons are plentiful and strawberries are in peak season. And for a few […]

Treacle Tart! We Brits do like our puddings. Delig

Taco Thursday? Love all the toppings for tacos. As

For some reason, I have a need to make a large egg

Breakfast burrito, rather pleased with how it turn

Thanks to @bite.new.york for the inspiration! My n

My lettuce and kale have bolted, but I do now have

The future of grazing boards! Made eight separate

Looking through old photos ( procrastinating) and